The ‘A Crow Among Ravens’ series is a collection of pocket books by Joseph B Collins and Andrew J Brown.

It is the tail-end of the first millennium, and there is something very rotten in the heart of Jorvik. A mad, Saxon earl perches precariously atop the throne of the old Viking king, barely controlling a court of predatory schemers hellbent on tearing whatever strips of power they can from the dying corpse of the city. Yet there is something far, far worse than Machiavellian politicians stalking the back alleys and byways of the once great capital of the north.

Persuaded out of his self-imposed exile to find a missing bridegroom, Olin Odinson is thrown into a sinister world of cannibals, Satanists, demons, and witches. Yet, as he struggles to come to terms with the altered nature of the city he once called home, it is the unavoidable meeting with his abandoned sister that fills Olin’s heart with dread.

For more information visit A Crow Among Ravens Series Website 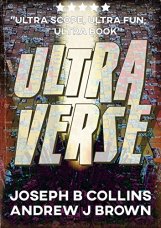 Ultraverse is a big scope sci-fi novel by Joseph B Collins and Andrew J Brown.

Arwres Jones isn’t having a good day. Waking up in a fugue, she can’t quite believe that she’s let her life get so, well, boring. Seemingly incapable of escaping her stupid, dead end job she begins exploring strange new worlds through narcotic induced dreams. When she has a dramatic epileptic fit, the boundaries between her dream worlds and reality begin to falter.

Ultraverse is Available on Kindle from Amazon

gSKY corp’s Eternity Pill delivers a designer afterlife experience “on your terms”. But Eternity is being attacked by Hell Loop worms and the real world is falling apart. Now it’s up to hot shot cop Lamaloula Bains and Ward Green, the son of a deranged radical Christian terrorist, to uncover the truth about a sinister plot to control humanity through a toxic cocktail of drugs, religion and high rez graphics.

Afterloop is Available in Kindle and Paperback format from Amazon

Ultraverse is available to buy on Amazon in Kindle format 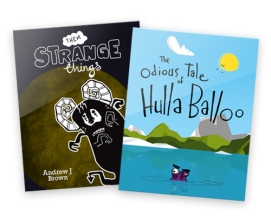 The Odious Tale of Hulla Balloo is the dastardly story of a terrifying sea monster and his (almost) equally scary pet frog, Horace.  They cast a shadow of fear over the oceans, but when Shelly, a small girl from Outer Mongolia, refuses to be a victim Balloo and Horace meet their match.

What are the lost and dread Unseelie? Discover the dark side of the fairy world inside the chilling pages of this charming short tale to scare kidlings with before bedtime. The perfect introduction to the art of spooky storytelling.

Them Strange Things is available on Lulu and Amazon